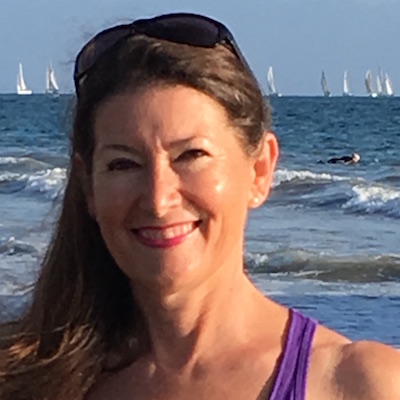 My name is Maria Baltazzi, traveler and long distance walker. In my other life, I produce television shows. Almost all are shot in remote locations around the world. One of the shows I did was Survivor for CBS. I was one of the original show producers. I did seven seasons before moving on to other adventures, including this one. I cannot tell you where it comes from, but I have this Maasai-like ability to stand on my feet and walk forever. I realized this long before I was standing around on beaches watching Survivor contestants failing miserably at making fire, or trailing with cameras after four modern day explorers retracing the infamous steps of Henry Morton Stanley’s 1871 expedition to find Dr. Livingstone for a History Channel mini-series, called Expedition Africa: Stanley & Livingstone. In fact, it was the unlikely tangential crossing of these two shows that set me on the path, which led to founding Sojourn Explorers.

When I finished production on Expedition Africa, which was shot in Tanzania, I took advantage of being there and climbed Kilimanjaro. Mind you, I had never climbed a mountain before, and to my great surprise succeeded. What I did not share with anyone until the last day… was that I had a fear of heights. This ‘win’ gave me a lot of courage. So then when I finished post-production on the same series, I decided to again try something I had never done before: the trek to Everest Base Camp. I, literally, squeezed this in before having to be in New York for the show’s premiere. It was when I landed in New York that I learned the winner of Survivor Africa, Ethan Zohn, had been diagnosed with cancer (thankfully he is all better today!) Something that really hit home with me because my mother had ovarian cancer (also thankfully survived!) I immediately wanted to do something that would both support Ethan and honor my mother. As the universe would have it… Ethan had become a spokesperson for The Livestrong Foundation for cancer research and awareness. They happened to be one of the sponsors of that year’s New York Marathon. That was 2009, the year I decided that I should put my gift to walk long distances to real use, something beyond listening to audio books.

So I traded in my hiking boots for trail shoes and started training for my first marathon (26.2 miles). I have done the New York City Marathon (2009), Los Angeles (2010), Athens (2010), The Great Wall (2011), The Solar Eclipse Australia (2012), Safaricom Kenya (2013), Rio (2014), and Antarctica (2015), all as fundraisers. Little did I know what an incredible door I was opening, one that would lead me to walking marathons for charity on almost every continent, and eventually launching Sojourn Explorers.

Today we curate inner and outer Transformational Travel experiences for a greater good. We support One Percent for the Planet, an organization that assists environmental and sustainable nonprofits throughout the world. We also promote cancer awareness and research through Stand Up 2 Cancer.

Please check out the rest of the Sojourn Explorers team!

This website uses cookies to improve your experience while you navigate through the website. Out of these cookies, the cookies that are categorized as necessary are stored on your browser as they are essential for the working of basic functionalities of the website. We also use third-party cookies that help us analyze and understand how you use this website. These cookies will be stored in your browser only with your consent. You also have the option to opt-out of these cookies. But opting out of some of these cookies may have an effect on your browsing experience.
Necessary Always Enabled
Necessary cookies are absolutely essential for the website to function properly. This category only includes cookies that ensures basic functionalities and security features of the website. These cookies do not store any personal information.
Non-necessary
Any cookies that may not be particularly necessary for the website to function and is used specifically to collect user personal data via analytics, ads, other embedded contents are termed as non-necessary cookies. It is mandatory to procure user consent prior to running these cookies on your website.
SAVE & ACCEPT